One year ago I locked myself up in the house, all alone with my thinkings and a stubborn weight in my chest. I had an unyielding desire to create an opportunity for something great.

Not great in terms of a situation that would benefit me, my needs or even my bank account, but a situation that would contribute to the conservation of an extraordinary animal whose existence was facing extinction. And not just any animal (as we know there are many facing similar misfortune). It was the Bornean sun bear that called my profound attention. 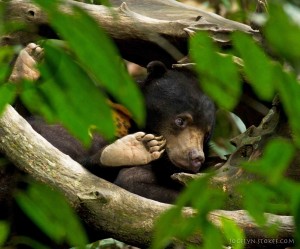 It had been nearly three years since I first met the sun bears of Borneo and experienced the kind of moment of realization that changes the course of your life forever. Since then I had committed myself to a new discipline of studying the science of wildlife conservation and management, which enabled my newly gained scientific foundation for research. This was just the beginning. I knew I needed to do something more. But what? How?

What kind of project could I design to contribute my energy and skills to sun bear conservation in a way that would be effective now and really assist in the current effort??! After some thorough investigation of various ideas and options that might answer this perplexing question, the Ah-Ha! moment finally struck.

I would raise the awareness of sun bears through a campaign that would also serve as a platform for raising funds. I would raise enough money to fly back to Borneo contribute to the research development that was necessary to further the scientific communities’ understanding of these little-known bears, while simultaneously document rare footage of the bears in the forest to promote educational awareness of them all over the world!

And this is how Survival of the Sun Bears began…

Now, behavioral observation pilot studies are underway and the educational documentary is flexing its form in the video editing timeline.  Unique, never-before seen video footage of sun bears in their natural forest habitat is being met with first-time observation studies to reveal extraordinary behaviors to the international science communities!  So, even though this is still just the preliminary phase and there is endless work ahead, progress in underway.

Check out the latest feature publication on Survival of the Sun bears by Mongabay.com