Centuries ago, deep in the misty jungles of Borneo, where headhunting tribesman ruled the forest, and pirates claimed surrounding islands, an agreement was made between leaders.

At this time, two sultans reigned over the regions known as Sulu and Brunei. In all his royal glory, the Sultan of Brunei decided to gift the entirety of Sabah to his neighbor, the Sultanate of Sulu. Although this land gift occurred in the year 1658, before the islands of the Philippines were established as the country we know today, this ancient transaction now serves as impetus for modern day territorial dispute.

The plot thickens when considering an additional arrangement, made in 1878, between another Sultanate of Sulu and the British North Borneo Company, in which the land of Sabah was leased to the Europeans on a “rolling contract.” Although 135 years have come to pass, the Malaysian government still pays a token fee ($1,500) every year to the Philippines government in continued recognition of this lease agreement.

And Now, What Does Any of This Have to do with Sun Bear Conservation?

Well, not much, until a couple months ago, when a band of armed pirate rebels violently claimed a remote coastal village in Sabah. Upholding their primal allegiance to the Sultan of Sulu, while boasting their controversial interpretation of this ancient land-lease agreement, the rebels initiated a murderous siege in the dense forests of Sabah.

From late February through most of March, the violent battle proceeded, claiming dozens of lives and putting peaceful, neighboring-country connections in jeopardy.

“The governments of Malaysia and the Philippines are trying to manage this incident carefully,” Jonah Blank, senior political scientist specializing in Southeast Asia, claims.  Although the dispute has been tamed for now, international travel advisories still remain intact, and media coverage over current circumstances remains vague and diluted.

It has been said that Sabah stands as the last remaining hope for sun bears. The jungles of this Bornean state exist as one of the last remaining and oldest forests on Earth, while sustaining the greatest concentration of suitable bear habitat and the largest, lasting populations of wild Bornean sun bears. 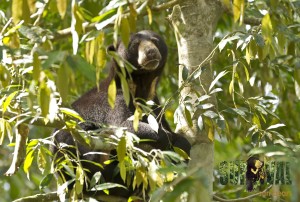 Not only are these forests critical habitat for sun bears, they also contain a greater multitude of biodiversity than almost any other explored ecosystem in the world.

Officially stated by the IUCN, and heavily felt from my new home in Sabah, sun bear populations are decreasing at a vastly unsustainable rate.  This makes any events that pose further detriment to the forests of Sabah quite concerning for the bears indeed!