While trekking though ankle-deep muddy sludge, gazing up into the sweltering mirage of the forest canopy, I start to feel that sharp-gnawing sensation that has become so familiar since moving to the rainforest. I quickly reach for the wiggling culprit that has slithered its way under my mosquito-shirt and yank the blood-thirsty parasite away from my sweating flesh. It’s just a tiger leech, but the trickle of blood left from its bite tells me the tiny wound will itch for days.

The sounds of heavy breathing and a frantic, leaf-rustling explosion of movement, followed by a loud, heart-stopping bark coming from the fluorescent green foliage overhead captures my attention next.  As I wipe the sweat from under my eyes, I begin to hazily make out the silhouette of a dark, furry beast at least 20 meters above the forest floor. I have located my target. A young, female sun bear foraging for termites from her precarious perch on the arm of a mighty Dipterocarp tree.  Actively engaged in observing this display of arboreal behavior, I allow my bag to settle in the leaf-litter as I pull apart the legs of my tripod and aim my lens toward her position in the dense canopy.

I begin to take note of her location and activity in my waterproof field journal, mentioning the aggressive vocalizations I observed as she defended her desirable position in that vine-entangled tree from another young sun bear (i.e. her Bark!) The shockingly loud and abrupt sun bear ‘bark,’ which serves as their most aggressive vocal expression, might be one of the most surprising aspects of behavior displayed by these small and elusive bears.  Yet, they do ‘bark,’ quite like a large dog, and yes, it is very loud! 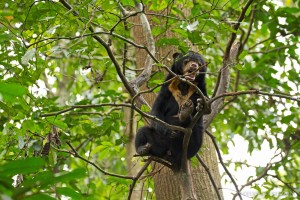 After some initial note-taking and visual documentation via filming, my awareness of the bountiful array of alternative angles for observing this actively arboreal sun bear inspires further movement. So, I begin to trek up some mud-slide of a hill to arrange my equipment for another angle.

Moments into my new set-up, with tri-pod legs arranged haphazardly on the sliding angle and my full attention focused on that gorgeous little bear up in her tree, an instant rush of hissing primate rage surrounds me! Suddenly blind-sided by two dominant male macaques bearing wide-mouthed displays of their razor-sharp canines and ready-to-lunge stances, I fly into freaked-out ninja mode wielding my monopod, quickly glancing from one mean monkey face to the other and back again.  “Woah.. Woah Woah…” I command in a desperate plea to calm these vicious attackers.

My mind is racing with memories of past encounters with these massive and terrifyingly aggressive native monkeys.  I had been forced to protect myself against these beasts before, but only one at a time and I had swung my tripod over my head while shrieking like a crazed maniac, whacking the air between myself and the sharp-toothed primate… that was weeks ago. I had stupidly thought my antics might have scared him off for good. Stupid.  Now, there were two of them, surrounding me, ready to lunge, ready to tear my flesh with their ample jaws….  Shit! 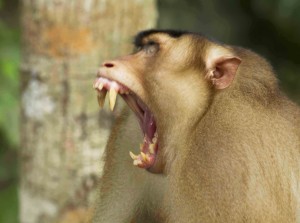 There was no way I could take both of them. I knew if I swung at one, the other would lunge at me.  With one hand on my monopod still braced to swing, I grabbed my walkie-talkie. Pushing the side with my thumb, I breathed out…“I am surrounded. Under attack. Send help, asap!”  In no time, I hear boots hitting the earth, humans calling and the clunky, spattering of rocks being pelted in our direction.  The macaques quickly realized my back-up had arrived. Their aggressive faces turned solemn as they bounded off into the trees.   Phew… “Thanks Jon” I called out…”that scared the shit outta me!”

Meanwhile I continue hiking up the hill away from the location of near-assault, and as the sky swelled, heavy with rain, for the forests’ afternoon shower, I found myself perfectly placed beneath the sheltering branches of a broad-leaved tree.  Under this jungle umbrella, I stood and watched as two young bears chased each other up and down the trunk of a large tree in the pouring rain.  They played together for the entire shower, excited and pleased by the cool rainfall, and I filmed the entire event from my dry tree shelter. 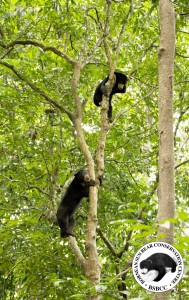